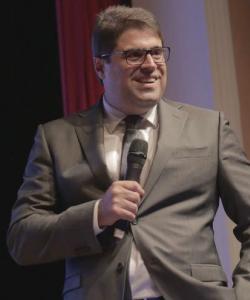 Bento presents our next World Congress in Sao Paulo
It is about NLP (IN), Coaching (ICI), Hypnosis (WHO), Constellation (WSCO) and Mindfulness (In-Me).

Bento is part of the development team of the World Systemic Constellation Association WSCO: www.nlp-institutes.net/news/founding-of-the-world-systemic-constellation-organization-wsco

From October 17th to 19th in 2019 he will present the IN ICI WHO and WSCO World Congress in Sao Paulo about "The Magic of Emotional Intelligence". At this time WSCO will be officially introduced through Bento as well.

He is a Business administrator, writer and is among the leading authorities in NLP (Neurolinguistic Programming) in the world. Throughout the last 20 years, he has developed course methodologies, workshops, lectures and offers workshops in Brazil, Europe, United States and Mexico which together ahd an huge impact on the life of more than 1 million people.

After one year in Germany teaching courses in partnership with the German Master Coach Trainer Bernd Isert, he created methodologies that he applied in the courses Integrative Systemic Coaching IV and PNL & Constellation.